All about canapes (pronounced “can-a-PAY”) is word French which means “sofa” a nod to the toppings which “sit” on top of a piece of bread.

Canapes were served on stale bread a few years back and now it has grown into a wider term for finger food.

END_OF_DOCUMENT_TOKEN_TO_BE_REPLACED 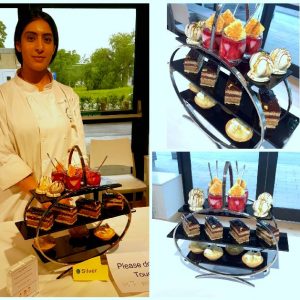 On 17th of May 2017, students from Lakefield Hospitality College had their first taste of the competition experience at The 3 Counties Salon Culinaire, one of the UK’s largest live culinary competitions held at Central Bedfordshire College in association with the Craft Guild of Chefs.

Three from back of house students took part in Cupcakes (Tasted), Afternoon Tea Pastries (Tasted) and Bakery Skills. Omero Galluci, development chef and one of our patrons, mentored and helped our students all the way through the planning, processing and executing of each class.

Erica Lana won Gold for her Bakery Skills (Display): Erica has to display 2 loaves and 12 assorted rolls. Erica said ” I felt happy and proud to win something and I thank Omero for helping me achieve it”.

Naine Shirley won Gold for her Cupcakes (Tasted): Naine has to present 12 cupcakes in 3 different flavours. Naine said “I have learnt how I should improve in my work by taking the judge’s feedback positively and this event helped me to learn by taking people’s ideas and to experiment more in the future. I also learnt that I should practice a lot to get the best outcome and don’t leave things to the last minute”.

Bassi won Silver for her Afternoon Tea Pastries (Tasted. Basi produced an assortment of afternoon tea pastries 16 pieces, 3 different varities. Bassi said “The competition was one of my biggest achievements of the year, not only did I get a silver medal, but I developed as a person. I feel so proud of myself and grateful for all the support given by the kitchen team at Lakefield”.

Click here (The 3 Counties Salon Culinaire)  if you want to know more about the competition.

Last 3rd of May 2017, Lakefield Hospitality College was awarded for the ‘Innovative Practices in Creating School Partnerships sponsored by Hobart Cooking Solutions at the PACE Awards 2017 held at the Liverpool Hilton Hotel.

The team attended the PACE National Conference which is about introducing programmes and success planning. The team divided up to listen to different workshops including Breaking Into HE To Broaden Your Horizons by Niel Rippington, Dean of the College Food, University of Birmingham. Paul Askew, Chef Patron and Steven Hesketh, Managing Director of the Know Collection gave a wonderful session about Future Labour And Desire Skills.

The Conference was followed by Awards and a Gala dinner to acknowledge individuals, departments, schools, colleges and partnerships that have introduced outstanding learning initiatives or techniques in hospitality training and development over the last 12 months. The dinner was presented by Cyrus Todiwala, OBE on Zest Quest Asia.

Thank you to Sue Kenyan, PACE Director and to PACE for believing and for giving us the opportunity to excel in what we do. Frankie said “this award means a lot for Lakefield as we’ve worked hard in partnerships with school this year. It’s all been worth it!”

Lakefield Hospitality College is owned by an Educational Charity, we are therefore non- profit making and rely on independent grants and on the support of our sponsors. Lakefield is unique because we offer our students real work experience and we focus on developing the whole person and their employability skills.

This award is looking for examples where colleges/training providers have linked successfully with schools in order to provide a rich and rewarding experience for potential hospitality students from high schools and sixth form colleges. The project should demonstrate a diverse range of realistic activities and excellent progression rates onto hospitality study programmes.

We are delighted to introduce three new patrons, who are highly valued in the Hospitality Industry to support Lakefield Hospitality College. As the industry is such a demanding one, it is vital that our students have positive role models and support from the experts in the field.

On the 15th of March, we had our annual patron’s dinner, our special way of saying a huge thank you for all the support they have given us throughout the year. The guests arrived to canapes and champagne and listen to a presentation given by Lisa Clapham, Director of Lakefield about the progress, developments and our goals for the coming year. This event was a great opportunity to welcome the new patrons to the Lakefield team. They proceeded to discuss the presentation over dinner.

After a day of intense preparation, Omero Gallucci, patron and development chef from the Craft Guild of Chefs with Doris Morales our Head chef together with her team, treated them to an exquisite five-course meal including a chocolate dessert designed by Omero Galluci and executed by Bassi Sira, Level 3 Patisserie student.  The front of house team, led by April Poblete, food service manager showcased their skills and looked after the service, working together with the back of house as a single team. Ana Greguric, Level 3 Professional Cookery student, designed the petit fours and one of the starters that she will be using for the finals of the Cook South Africa Competition in April.

We were grateful to Ian Parsons, CCS Business Director who provided the glasses that we used for one of our desserts. We were honoured to have our Patrons for the evening as they are a big part of Lakefield. Frankie Strinati, PR and Schools Liaison gave an after-dinner speech to thank them for their support over the past years and to praised the staff and students for all their hard work.

Will Torrent – an award-winning pastry chef and Waitrose consultant, He has made many TV appearances and won various awards both national and international. He has also been extensively profiled by the British press.

Mark Hill – executive chef at the House of Commons since 2008, where he is in charge of 15 food outlets, with more than 130 staff in London. Mark is also a member of the England Culinary Team, who competed in Luxembourg at the Culinary World Cup in 2010.

Isabel Fortin, a Level 2 Professional Cookery Student won a bronze medal for the Confectionery section in world skills UK. The competition took place on 26th ofAugust 2015, one of the most reputable competitions in the hospitality industry. Only 15 students were chosen for the  Confectionery heat, Isabel being one of them. WorldSkills aim is to showcase the value of skills and raise the recognition of skilled professionals worldwide.

END_OF_DOCUMENT_TOKEN_TO_BE_REPLACED

This website uses cookies to improve your experience while you navigate through the website. Out of these cookies, the cookies that are categorized as necessary are stored on your browser as they are essential for the working of basic functionalities of the website. We also use third-party cookies that help us analyze and understand how you use this website. These cookies will be stored in your browser only with your consent. You also have the option to opt-out of these cookies. But opting out of some of these cookies may have an effect on your browsing experience.
Necessary Always Enabled
Necessary cookies are absolutely essential for the website to function properly. This category only includes cookies that ensures basic functionalities and security features of the website. These cookies do not store any personal information.
Non-necessary
Any cookies that may not be particularly necessary for the website to function and is used specifically to collect user personal data via analytics, ads, other embedded contents are termed as non-necessary cookies. It is mandatory to procure user consent prior to running these cookies on your website.
SAVE & ACCEPT

We have received your message. We'll reach out immediatly, please check your email for the information requested.

BACK TO HOMEPAGE
VIEW OUR COURSES